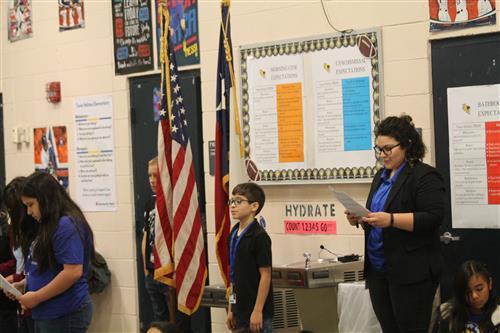 Veterans served as guest speakers. Marine Corps Veteran Oralia Spriggs (related to several teachers at Holmes) spoke about how her service taught her discipline and helped her learn more about herself. Spriggs, a graduate of Holmes and BCISD, said, “I am glad to have served my country. It’s important because we are protecting the freedoms we have here at home.”

Matagorda County Educational Services Diagnostician Lisa Meager spoke next. An Air Force Veteran with many family members who are currently serving or have served in the past,  Meager said that she learned dedication, organization, and pride in herself, family, and country from her military experience.

The final guest speaker was Willie Greer, a Marine Veteran. He told the audience, “When I look out at this group, I see the future leaders and future workers, and this makes me so proud. In the Marines, I helped protect our shores and our freedoms, and to be a vet is a great honor.”

The Glee Club led the singing, with the students and guests joining them on The Star Spangled Banner, This Land is Your Land, America the Beautiful and You’re a Grand Ole Flag. The Glee Club singers and many of the students seated in the audience also interpreted the song with American Sign Language. Glee Club members also introduced speakers and in general served as emcees.

At the end of the program, all veterans in the audience made their way to the stage area, where each introduced him or herself. Each guest speaker was also presented a memento from the Holmes students.